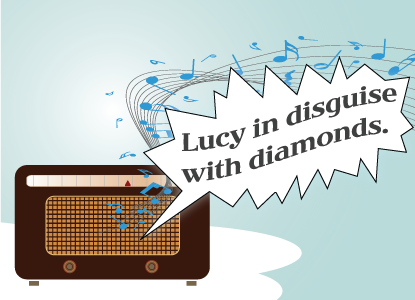 Since this is an article on communications, it is important to define and clarify this word: mondegreens. Mondegreens are mangled song lyrics that a listener might mishear or misunderstand.

Here are some examples:

“I’m just a girl” by No Doubt has been misheard as, “I’m just a squirrel”.

The Beatles sang about “Paperback writer” not “Pay for my Chrysler”

As these examples suggest, how we “hear” words does matter. If a squirrel named Jose is telling us to pay for their car, then we may feel confused, annoyed, or insulted. And the speaker might be surprised or hurt that their “clear” words were either ignored or provoked a surprise reaction in the other person.

Words matter also in daily life. Here are some more song lyrics that where intended to be clear, sincere and vulnerable, may have been misheard:

A song by THE POLICE, “Every Step You Take” has the lyrics, “My poor heartache.” Which is to not be confused by, “I’m a pool hall ace.”

And the Beatles told us that “She has a ticket to ride” and not “She has a chicken to ride.”

I once had a friend in college who took exception when people asked him to repeat his words. He would say, “I didn’t stutter!” For him, missing words or mishearing a question was annoying and insulting. After a while, we learned to just smile and nod, and walk away not knowing what he was saying. But the lesson for me was that there was more to communicating than I thought.

I learned early on in life that communication can be like phone calls; there can be no signal or at other times, static. I can miss information for many reasons. Most are unintentional.

Permission to Clarity and Verify

It is important to be clear in what we say, and for the other person to be clear about what was said. Sometimes it is necessary to pause and clarify what was said. While it may interrupt and slow a conversation down, it’s better to do this than leave someone with the impression that a person is “just a squirrel,” walking around with “a new pair of shoes,” or that they are a “pool hall ace.”

If you’d like help improving communications in your marriage or other relationships, Christian counselor Dr. Douglas Frey believes in Biblical principles and bringing forth God’s grace in meetings and sessions. Call or email Douglas Frey Ph.D. (952-920-2789). He is a licensed Christian counselor serving individuals and families in Eden Prairie and nearby Chanhassen, Chaska, Shakopee, Minneapolis, Edina, Minnetonka and other Western Suburbs.